Influencer marketing begins by identifying people who can influence the behaviour of your target audience. Influencers are not "traditional celebrities" but usually people who have gained fame through social media platforms such as

Firms will create brand partnerships with influencers who will review the products and talk about them in their blogs, video logs or social media posts. Popular vloggers include Zoella, Unboxing Therapy and Ryans Toys. 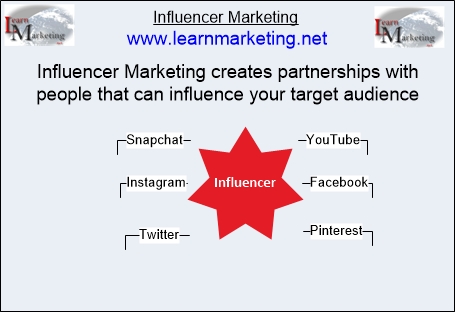 Why Has Influencer Marketing Grown So Rapidly?

What Are The Benefits Of Influencer Marketing?

Traditional marketing methods such as television, radio and newspapers can be expensive. They are also indiscriminate and do not target a particular segment of the market. Whereas influencer marketing can have a better reach by reaching your target audience for a lower cost. There is a large number of influencers available so firms are able to select influencers whose pricing is within their budget and offer more Value Per Marketing Spend.

Many consumers trust other users of the products more than the brand manufacturers themselves. The views of influencers are believed to be more genuine/sincere than promotional material produced by manufacturers. To retain the trust element influencers should declare their association with any products that they are featuring in their social media. In fact in the USA in April 2017 the Federal Trade Commission reminded firms and influencers that they need to declare social media endorsements.

What Are The Drawbacks Of Influencer Marketing

Creating individual agreements with influencers about how they will use the firm's products on social media platforms such as Instagram, twitter and Pinterest can facilitate control over the content that the product is featured in. However if the firm doesn't have a direct agreement with the influencer it can lead to the firm being associated with influencers that they do not want an association with. For example in 2017 a large number of firms stopped/reduced their levels of advertising on YouTube because they could not control the type of videos that their promotions appeared on.

There is little value in paying an influencer with millions of followers and likes if a partnership with them doesn't increase product sales.