The Photo below has an example of ambush marketing where one firm is using another firm's promotion material to promote their own firm. 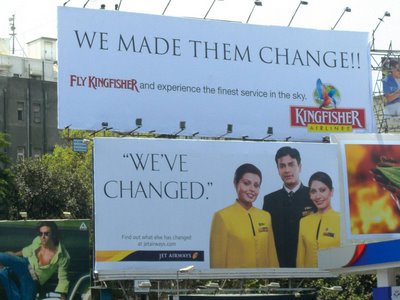 When Is Ambush Marketing Used?

It costs a lot of money to sponsor events that will receive a lot of media publicity for example the Olympics, the football world cup, national events and concerts. Some firms do not have marketing budgets to pay for this type of sponsorship or their application (bid) to sponsor the event may have failed. In such circumstances a firm may be tempted to engage in ambush marketing especially if the event is going to be sponsored by a competitor firm.

There are many examples of ambush marketing, here are three of our favourite:

Can You Prevent Ambush Marketing

Ambush marketing can be a cheap way to disrupt a competitor's marketing campaign or sponsorship deal. However as the London 2012 Olympics example proves it is not as easy as it used to be. Any company wishing to engage in ambush marketing will need to think imaginatively, when it comes to creating an effective Ambush Marketing Campaign that won't land them in trouble.