In this article we discuss Coca Cola's share a coke campaign. During the campaign Coca Cola replaced the distinctive coca cola name on bottles of coke with 250 of Great Britain’s most popular names. Coca Cola text was reduced to a smaller font at the top stating share a coca cola with (one of the 250 chosen names). The rest of the branding was left the same so that consumers could still identify the product as coca cola. Consumers were also offered the opportunity to create virtual labels online with their name on them. Virtual personalised labels could be shared with family and friends online.

In the summer of 2011 the marketing campaign was launched in Australia with 150 popular names. According to https://www.marketingmag.com.au/case-studies/share-a-coke-campaign-post-analysis-15944/ this resulted in

Share a Coke was launched in the UK in April 2013, according to Marketing Week the campaign resulted in:

Why Was It Successful?

The photograph below shows an example share a coke promotion photo by Coca Cola. 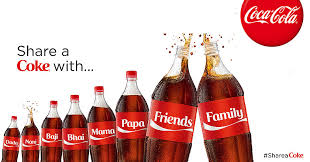 Would this type of brand amendment/debranding work for others?

Depends on how it is done but the main thing is that in the case of a popular brand you need the consumer to still be able to identify the brand. You will also need to bear in mind that this type of brand amendment will have a limited life span: after a while the novelty will wear off and customers will no longer be excited by seeing names on Coca Cola bottles. If you would like to ea