The games console industry is a very lucrative market appealing to consumers of all ages and backgrounds. The three main competitors are Nintendo, Microsoft and Sony and the competition between them is intense. The three competitors use a variety of marketing techniques to stay ahead of each other. Common marketing techniques which are used to increase sales include releasing limited edition consoles, offering bundle and captive deals, selling product add ons and carefully planned pricing.

Many if not all of the games console manufacturer offer limited editions of their consoles. For example Nintendo introduced a black edition of the Wii, and Sony launched slim editions of the Play Station.

In a bundle deal manufacturers will offer consoles with additional controllers, remote controls or games in order to tempt them away from competitors. The total cost of the bundle deal is usually cheaper than the total cost if you bought each item in the bundle separately.

After the initial launch of a games console manufacturers will usually lower the price of the console to keep up demand for their console, to keep up product demand they will also offer captive deals. A captive deal severely reduces the number of purchase options available to consumers. In the games console industry manufacturers will ensure that any popular games that they release can only be played on their consoles. For example if you want to play Halo you will need to purchase Microsoft's Xbox 360. Games console manufacturers usually make most of their money from software sales. They get their consoles into households by selling them cheaply and increase revenue by charging a premium price for new game releases.

Game console manufacturers are now adding optional extras giving consumers a choice of increasing the benefit they gain from their console. Nintendo with their Wii console are very good at this strategy. They have successfully marketed the Wii Fit Board as an optional extra and now also with the Wii Motion Plus. Microsoft's Kinect is an add on for the X box and was launched as a direct rival to Sony's add on products for the Wii.

Another common strategy used by the games console industry is the clever use of pricing during the life cycle of the product. Our diagram below looks at this common strategy.

When a new games console is introduced into the market the manufacture charges a premium price, the innovators within the market rush out to buy the product, because they want to be the first to own it. As the games console moves through the life cycle, the price is lowered , until eventually after a number of years the games console is at its lowest price point. At this lowest price point, laggards are most likely to buy the product, they have waited for a while and purchase at the point where the manufacturer will probably launch the replacement for their fading games console.

The graph below shows the global marketshare in the games console industry between Sony PS3, Microsoft Xbox 360 and Nintendo Wii in 2012

The graph below shows the global marketshare in the games console industry between Sony PS3, Microsoft Xbox 360 and Nintendo Wii in 2013 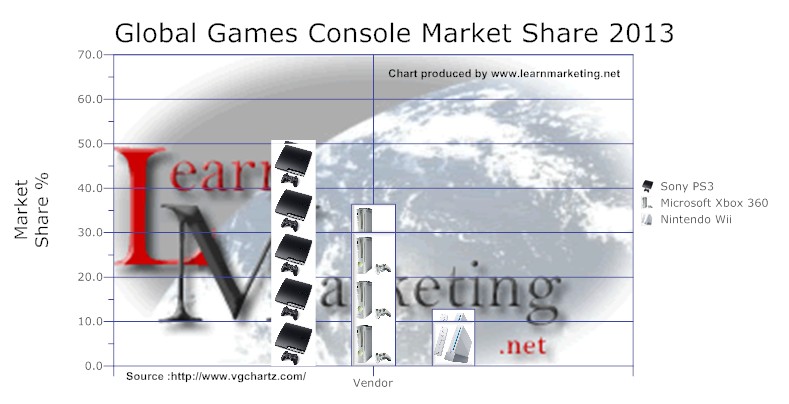 What's On The Games Console Horizon