An organisation's success is influencd by factors operating in it's internal and external environment: an organisation can increase it's success by adopting strategies which manipulate these factors to it's advantage. A successful organisation will not only understand existing factors but also forecast change, so that it can take advantage of change within the environments in which it operates.


The diagram below shows the 4 components of PEST Analysis; political, economical, social and technological. 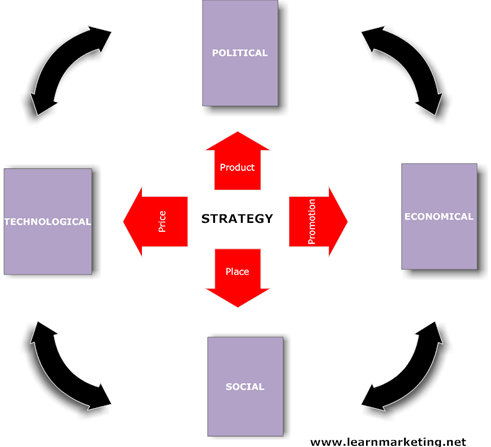 Non conformance with legislative obligations can lead to sanctions such as fines, adverse publicity and imprisonment. Ineffective voluntary codes and practices will often lead to governments introducing legislation to regulate the activities covered by the codes and practices.

The second element of a PEST analysis in involves a study of economic factors. All businesses are affected by national and global economic factors. National (and global) interest rates and fiscal policy is set around economic conditions. The climate of the economy dictates how consumers, suppliers and other organisational stakeholders such as suppliers and creditors behave within society. An economy undergoing recession will have high unemployment, low spending power and low stakeholder confidence. Conversely a “booming” or growing economy will have low unemployment, high spending power and high stakeholder confidence.

A successful organisation will respond to economic conditions and stakeholder behaviour. Furthermore organisations will need to review the impact economic conditions are having on their competitors and respond accordingly. In the current business world, organisations are affected by economies throughout the world and not just the countries in which they are based or operate from. For example: a global credit crunch originating in the USA contributed towards the credit crunch in the UK in 2007/08.Cheaper labour in developing countries affects the competitiveness of products from developed countries. An increase in interest rates in the USA will affect the share price of UK stocks or adverse weather conditions in India may affect the price of tea bought in an English café.

The third aspect of PEST focuses its attention on forces within society such as family, friends, colleagues, neighbours and the media. Social forces affect our attitudes, interests and opinions. These forces shape who we are as people, the way we behave and ultimately what we purchase. For example within the UK people's attitudes are changing towards their diet and health. As a result the UK is seeing an increase in the number of people joining fitness clubs and a massive growth for the demand of organic food. Products such as Fitbit attempt to deal with society's concern, about lack of exercise.

Population changes also have a direct impact on organisations. Changes in the structure of a population will affect the supply and demand of goods and services within an economy. Falling birth rates will result in decreased demand and greater competition as the number of consumers fall. Conversely an increase in the global population and world food shortage predictions are currently leading to calls for greater investment in food production. Due to food shortages African countries such as Uganda are reconsidered their rejection of genetically modified foods.

Unsurprisingly the fourth element of PEST is technology, as you are probably aware technological advances have greatly changed the manner in which businesses operate. Organisations use technology in many ways, they have

Technology has created a society which expects instant results. This technological revolution has increased the rate at which information is exchanged between stakeholders. A faster exchange of information can benefit businesses as they are able to react quickly to changes within their operating environment. However an ability to react quickly also creates extra pressure as businesses are expected to deliver on their promises within ever decreasing time scales. For example the Internet is having a profound impact on the marketing mix strategy of organisations. Consumers can shop 24 hours a day from where ever they want and however they want via smart phones, laptops and tablets.

The pace of technological change is so fast that the average life of a computer chip is approximately 6 months. Technology is utilised by all age groups, children are exposed to technology from birth and a new generation of technology savvy pensioners known as “silver surfers” have emerged. Technology will continue to evolve and impact consumer habits and expectations, organisations that ignore this will hinder their success.

The diagram below captures the six elements of a PESTLE Analysis 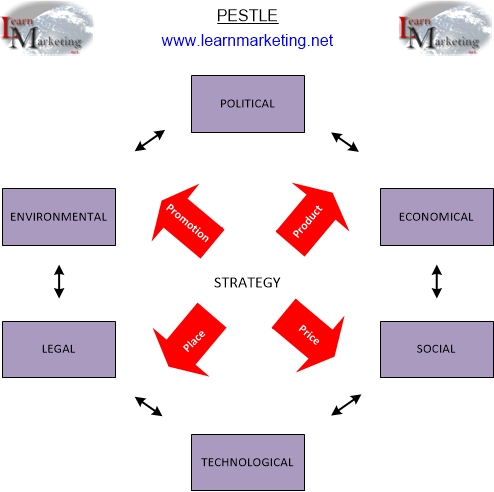 A PEST analysis is sometimes expanded to incorporate legal and environmental factors; this is known as a pestle analysis. There are many statutes books containing company law as almost every aspect of an organisation’s operation is controlled through legislation from treatment of employees through to health and safety. Legal factors are important as organisations have to work within legislative frameworks. Legislation can hinder business by placing onerous obligations on organisations. On the other hand legislation can create market conditions that benefit business.